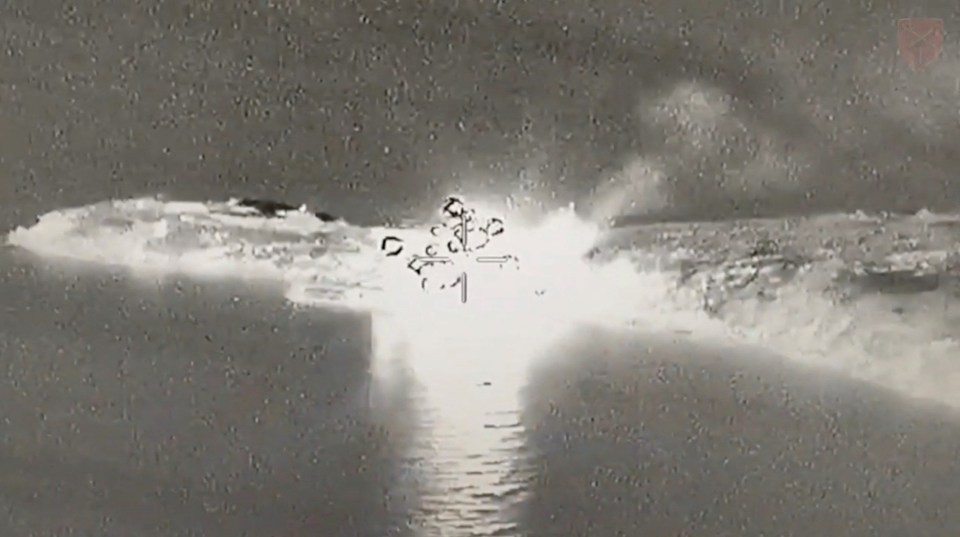 THIS is the dramatic moment a Ukrainian drone strike wiped out Russian targets on Snake Island.

Ukraine released a video today of an alleged military drone hit on Kremlin landing ship supplying a TOR anti-aircraft missile system to the island in the Black Sea.

An aerial view shows an explosion at Snake Island[/caption]

The aerial footage appears to show the destruction of a large Serna-type landing craft in an air strike.

In the video, a drone appears to be locking onto a target before unleashing its powerful cargo on the unsuspecting Russians.

Thick black smoke was seen rising overhead in satellite photos in the aftermath of the strike.

Ukrainian official Anton Gerashchenko said: “Enemy units remaining on Snake Island remain without air cover and will be destroyed and burned out like cockroaches or locusts.”

Other reports said the landing craft had been hit by a hit by a Ukrainian Bayraktar TB2 military drone.

The viral video also showed an attack apparently on a building on Snake Island.

However, the footage of the strike on the vessel was not dated and in the aftermath, people were seen moving about on the vessel.

The Serna class – Russian designation Project 11770 – is a type of “air cavity” designed landing craft constructed for the Russian Navy.


Putin’s £500m superyacht SEIZED after we revealed sickening luxury onboard

The claim came a day after Ukrainian sources alleged they had struck modern Russian frigate Admiral Makarov in a Neptune missile attack.

There has so far been no confirmation of the Makarov attack which was said to have damaged the warship.

Worst secondary schools according to Ofsted revealed… is your school on the list?

Although not yet confirmed, the alleged airstrike would be yet another blow to Putin who has sustained heavy losses in his invasion of Ukraine.

Earlier today, Russian troops were out in force parading nukes and tanks for a rehearsal of the annual Victory Day celebrations on May 9.

Pandemic aid stalled in the Senate and Shanghai remained in lockdown: The week in Covid news.