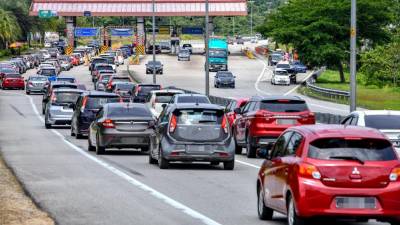 Traffic flow under control, congestion reported only in several areas

KUALA LUMPUR: Traffic flow on major expressways in the country is under control and congestion is reported only in several areas in the north, south and east heading towards the Klang Valley as at noon today.

A spokesman for the Malaysian Highway Authority (LLM) said for the route heading to the Klang Valley from the east, a 21 kilometre long congestion was reported from Karak to Bukit Tinggi.

“Traffic flow from the north and south to the Klang Valley is under control and congestion is reported at the hot spots areas along the North-South Expressway (PLUS) in Ipoh Selatan to Simpang Pulai, Gua Tempurung to Tapah, Bidor to Sungkai and Sungai Buaya to Rawang, “ he said when contacted by Bernama.

According to the spokesperson, for the route from the south, congestion was reported in Simpang Ampat to Pedas Linggi and the Seremban Rest Area to Port Dickson, “ he said.

The free toll rates on the North-South Expressway and the East Coast Expressway (LPT) will end by midnight today. — Bernama

No discussions on group supporting Ismail Sabri in Umno election