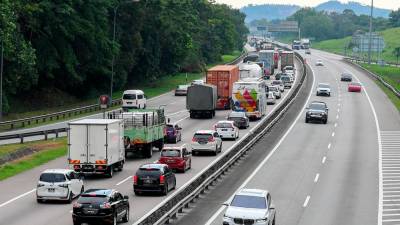 KUALA LUMPUR: Traffic flow to the Klang Valley from the north and east is still congested as at noon as more city folks return home after the Hari Raya Aidilfitri celebration.

A spokesman of the Malaysian Highway Authority (MHA) said sluggish movements from the north heading to the Klang Valley were detected in Bertam heading to the Sungai Dua toll plaza, from Permatang Pauh to Seberang Jaya and Juru to Juru toll plaza.

“Apart from that, the massive traffic volume was also reported at Bukit Tambun heading to Bandar Cassia, Alor Pongsu to Bukit Merah, Changkat Jering to Bukit Berapit. Kuala Kangsar to Sungai Perak Rest Area until the Menora Tunnel, Ipoh to Gopeng and Bidor to Slim River,” he told Bernama.

However, he said the traffic flow from the south to Klang Valley was under control with congestion occurring at Sedenak heading to Simpang Renggam.

“MHA expects the situation to persist until late night and motorists are advised to plan their journey ,” he said. — Bernama

The war of the betrayed bride