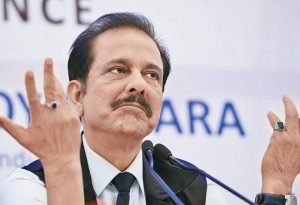 New Delhi: The Supreme Court Friday stayed the Patna High Court order directing the Director General of Police (DGP), Bihar, to produce Sahara Group chief Subrata Roy before it May 16 in a matter in which it was said that some companies of the Group were not returning money to the investors.

The apex court also stayed the separate order passed by the high court which had February 11 directed to add Sahara Credit Cooperative Societies Limited and Roy as opposite parties to a bail petition pending before it and later, directed him to personally appear before it.

On April 27, the high court had directed Roy to personally appear before it noting that Sahara Group and other companies, which have been taking deposits till about one month back, are directed to come up with a plan for the return of investment of the investors.

A bench of Justices A M Khanwilkar and J B Pardiwala issued notice on the petition filed by Sahara chief challenging the high court orders.

“Issue notice. Stay of operation of the impugned judgement and order qua the petitioner,” the bench said and posted the matter for hearing on May 19.

Senior advocate Kapil Sibal, appearing for the petitioner, informed the bench that earlier in the day, the high court has passed an order directing the Bihar DGP to produce Roy before the court on May 16 at 10.30 AM.

“We are informed that pursuant to the impugned order, the high court has issued further order today which has the effect of directing higher authorities (police department) to produce the petitioner (Subrata Roy) before the court,” the apex court observed.

“In terms of this order, we stay the operation of that direction given by the high court,” the bench said, adding that all concerned would act upon the order of the top court.

Sibal told the bench that the high court had passed these orders while hearing an anticipatory bail plea which has nothing to do with the petitioner.

Earlier in the day, the high court noted in its order which is uploaded on its website, that prayer for exemption of Roy has been earlier rejected twice on May 6 and May 12.

The high court also observed that despite various chances given to Roy, he has failed to appear before it and the court has no option, but to order the authorities to produce him physically before it on May 16.

In its April 27 order, the high court noted that while considering the anticipatory bail applications, the court has come across cases of cheating committed by Non-Banking Financial Companies (NBFCs), and considering the same, various orders were passed in these cases earlier.

The high court had noted that it was informed that the Bihar Protection of Interest of Depositors (in Financial Establishments) Act, 2002 was enacted to control such activities but the public at large has been cheated by NBFCs without any control and the government functionaries under the Act have not been able to give any relief to them.

“On being noticed, Sahara Group has come with a plea that about Rupees 25,000 crores belonging to the Sahara Credit Cooperative Society Limited has been lying with SEBI and they are ready to pay the investors’ investment if SEBI returns the amount to them as per the order of the Supreme Court dated August 31, 2012,” the high court had noted.

Prior to that, on February 11, the high court had noted in its order that some interlocutory applications have been filed by some intervenors that their money is lying with Sahara Credit Cooperative Societies Limited and other companies of the Sahara Group and they have not been returning the amount to the investors.

New Delhi: The Supreme Court Friday stayed the Patna High Court order directing the Director General of Police (DGP), Bihar, to produce Sahara Group chief Subrata Roy before it May 16 in a matter in which it was said that some companies of the Group were not returning money to the investors. The apex court […]

Masks not mandatory in Maharashtra as of now, clarifies State Health Minister

UP Police books RGV over controversial tweet on Draupadi Murmu

Another Pure EV e-scooter catches fire, this time in Gujarat