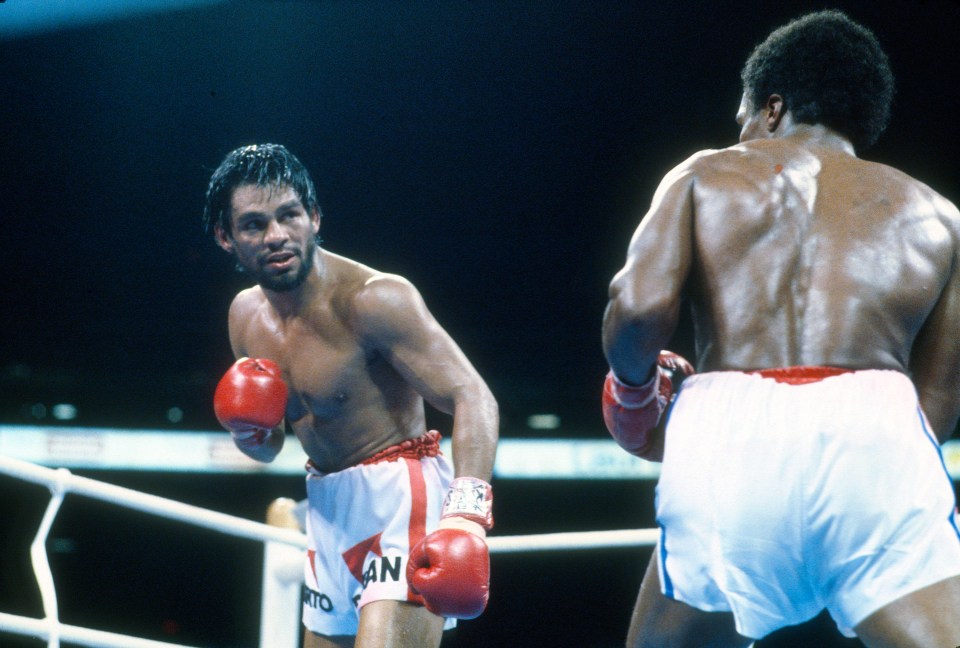 Ahead of Roberto Duran’s first fight with Sugar Ray Leonard, he stared into the soul of the legendary former world heavyweight champion ‘Smokin’ Joe Frazier ahead of what was known as the ‘Brawl in Montreal’.

Asked by a spectator prior to the welterweight classic in June 1980 – the first of their three meetings – if the Panamanian aka ‘Hands of Stone’ reminded him of anyone, Frazier was was emphatic in his response. “Yeah,” the legend said, recalling a notorious mass-murderer. “Charles Manson.”

Quite simply one of the toughest men to ever step foot in the ring, the legend and mystique of the deadly four-weight world champion was aided and abetted by none other than his venerated trainer, Ray Arcel.

Just three days before the fight with Leonard, an ECG determined that Duran had an irregular heartbeat.

“That can’t be true,” Arcel remarked. “Duran doesn’t have a heart.”

At the time, he had won 71 of his 72 professional fights and was beginning to earn the nickname ‘El Diablo’ amongst the American journalists for his killer instincts and eerie presence. Now, at the age of 71, his legendary status is assured and his place in boxing history cemented eternally.

Born in 1951 into poverty, Duran began sparring at the age of eight with grown men and won his first 28 fights as a professional after leaving the amateur ranks at the age of 16.

He took on Scotland’s Ken Buchanan at Madison Square Garden for the WBA, Ring Magazine and Lineal lightweight world championships and was considered a 2-1 underdog.

In the opening 15 seconds, Duran knocked Buchanan down and would continue to beat up the champion until the 13th round. An accidental low blow caused by referee Johnny LoBianco forced Buchanan out of the fight.

Duran returned to his home country with two new belts, an enhanced reputation and number one status. Buchanan said he left ‘with sore balls’.

In his autobiographical film entitled ‘I Am Duran‘, the legendary slugger suggests: “I was Mike Tyson before Mike Tyson came along.

“Fighters would take one look at me and crap in their pants. Leonard would be no different.

“It was starting to dawn on the Americans that they’d never come across anything like me before – this eerie, deadly being with his jet-black hair, dark eyes and bad intentions.

“El Diablo, they called me: The Devil.”

In November 2020, Tyson made a comeback against Roy Jones Jr at the ripe age of 54, but it was Duran who inspired him to lace up the gloves in the first place.

“Roberto Duran is my favorite [sic] fighter,” Tyson wrote on Facebook. “When I saw Duran fight, he was just a street guy…Man, this guy is me, I thought. That was what I wanted to do.

“He was not ashamed of being who he was. I related to him as a human being. As my career progressed and people started praising me for being a savage, I knew that being called an animal was the highest praise I could receive from someone in the ring. I was ferocious and fearless like Duran.”

Duran defeated Leonard – the first loss of his career – in 1980 by tricking him into engaging and preparing for a brawl, instead of choosing to outbox the Olympic gold medallist in Montreal.

When they met in November that same year for a rematch, Duran had spent the time away from the sport partying and eating. He was forced to cut down from almost 200lbs to the welterweight limit of 155lbs in just under six weeks and it left him drained.

He knew Leonard would beat him before the first bell, but the Ali shuffle and the taunting from the American in the seventh round proved too much.

In the eighth round, Duran allegedly proclaimed ‘No Mas’ and waved his glove at the referee to end the fight.

The newfound celebrity status began way before the infamous sequel with Sugar Ray Leonard, with Duran actually appearing in Rocky II as a speedy sparring partner alongside Sylvester Stallone.

During filming for the sequel in 1978, Stallone reportedly gained confidence in his boxing ability during training for the first two films in the celebrated films.

The Panamanian allegedly beat up the A-List celeb so badly, he had to tell him to not hit him in the face when the cameras were rolling over fears it could ruin his good looks.

When Stallone was asked in 2014 about potentially sparring Bernard Hopkins, he told TMZ: “No. I learned my lesson from Duran.”

Fights at middleweight against Marvin Hagler and Thomas Hearns cemented his legacy as one of the ‘Four Kings’ of the 1980s and earned him career salvation as he continued to move up in weight and fight all comers.

In 2001, whilst still incredibly fighting, he was almost killed in a car crash in Argentina and required life-saving surgery after puncturing a lung caused by a broken rib.

At the age of 50, he officially announced his retirement and managed to poke fun at friend Diego Maradona during his final speech as a fighter.

He told El Panama America: “As of now, I am exercising so that when the (retirement) honours arrive the people will see me in shape. I don’t want to (look) like Maradona did, all fat.”

He finished with a career record of 104-16 and is widely recognised as one of the biggest punchers and most entertaining fighters to ever lace up a pair of gloves.

Forged on the mean streets of Panama, the ‘Hands of Stone’ inspired millions around the globe and plans on leaving this world exactly how he arrived.

“I was born a fighter and I will die a fighter,” he declared. “In this story there is only one legend. That’s me.”

Glimpses of Brittney Griner Show a Complicated Path to Release

Suryakumar Yadav is a bit like AB de Villiers, No. 4 is his best spot: Ricky Ponting