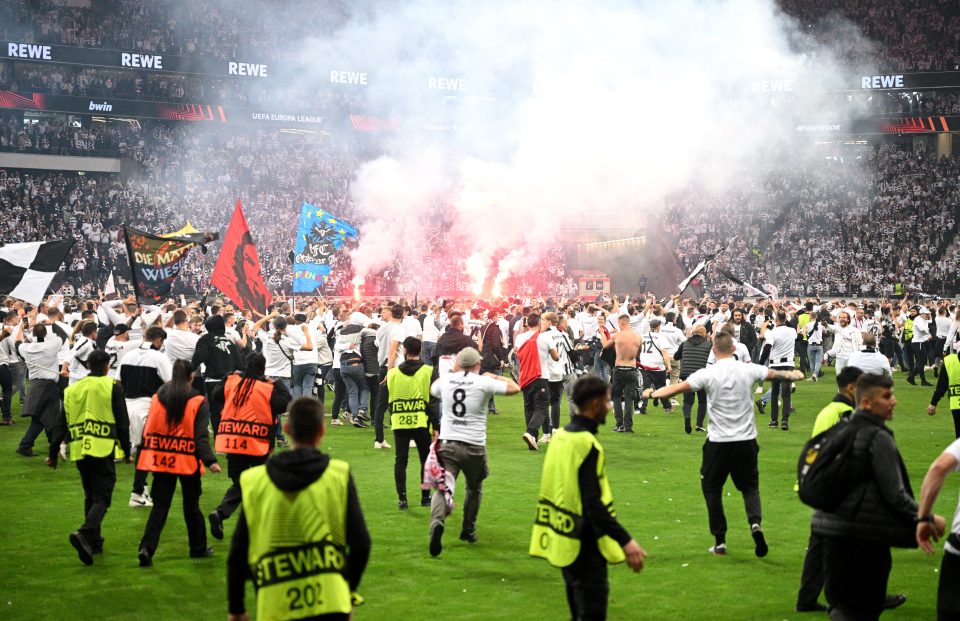 Eintracht Frankfurt fans invaded the pitch in their hundreds after beating West Ham to the Europa League final in what talkSPORT commentator Sam Matterface described as ‘unsavoury’ scenes.

A white-hot Deutsche Bank Park delivered an extraordinary atmosphere throughout the Bundelsiga side’s 1-0 triumph over the ten-man Hammers, which secured a 3-1 aggregate win in the semi final.

It ended West Ham’s Europa League dream and sealed a first European final for the German side since 1980.

Rafael Santos Borre struck after Aaron Cresswell was sent off early on – and West Ham manager David Moyes was also dismissed following an outburst at a ball boy.

The match threatened to boil over as confrontations broke out between the two teams – and riot police were needed at full-time to avoid violence between both sets of fans.

Matterface, watching on from the commentary booth, described the events unfolding in front of him on talkSPORT.

“It ends with a pitch invasion and a stream of white shirts onto the playing surface,” he began.

“West Ham try desperately to get their players off the pitch and away to safety.

“Lots of Frankfurt supporters are charging onto the pitch from all directions. Some of them are going towards the West Ham fans over in the corner.

“It’s an unsavoury end to proceedings. This should be a moment of celebration. Riot police have formed a perimeter around the West Ham fans.

“The Frankfurt fans are still moving in numbers towards the left-hand corner of the stadium where the West Ham fans are. It’s an unseemly end to what has been a wonderful Europa League campaign for these two clubs.

“There’s history in this competition and it’s a distant memory for most of these fans. There is joy among a number of the fans, but there is menace among the others.

“These are scenes reminiscent of back when these two clubs were in European football for long periods.

“It’s almost back to the eighties. It’s not particularly impressive. It’s quite a sour note on which to end this particular match on what should be a day of celebration.

“Those supporters have given us so much colour and so much energy over the 90 minutes.”

talkSPORT Bet Of The Day

The nine critical decisions that made the Avalanche a juggernaut

IPL 2022: All playoffs possibilities in 11 points