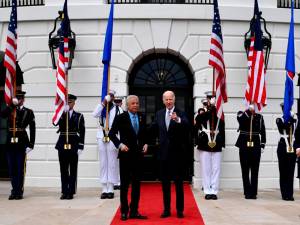 Ismail Sabri also joined Biden and ASEAN leaders for a group photo at the compound of the White House.

They then proceeded to an official dinner hosted by President Biden at the White House.

This is the second time such a summit with Southeast Asian leaders is hosted by an American President in the US.

The Philippines which is currently holding its general election is represented by its Foreign Secretary Teodoro Locsin Jr.

There is no representative from Myanmar, a country under junta rule following the Feb 1, 2021 coup.

It was reported earlier that Biden administration has set it as a top priority to serve as a strong, reliable partner in Southeast Asia.

In the previous virtual ASEAN-US Summit in October last year, Biden announced US$102 million in a new initiative to expand its engagement with ASEAN.

Federal Govt must do better at maintaining its buildings, says Johor exco

China Sea, Marcos Jr: Yes to Hague ruling against Beijing, no to spheres of influence

Vietnam dissidents released, sent to US ahead of PM’s Washington visit

New sanctions against North Korea are a hard lift, so US needs a Plan B, experts say.