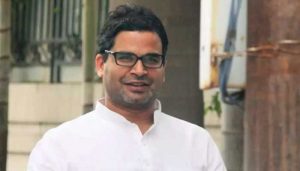 Patna: Prominent political strategist Prashant Kishor Thursday finally revealed his plan — a year to connect with the common people in Bihar before deciding to take any big political step.

Kishor, while interacting with the mediapersons here, said that he will start ‘padyatra’ from Gandhi Ashram in West Champaran from October 2 this year and cover 3,000 km across Bihar to communicate his ideology with the people of the state and take their feedback.

“The idea is to connect with the people of Bihar and understand what they are thinking about the current government and the governments in the past. In the last 30 years, two political parties with different ideologies and policies have ruled the states. Lalu Prasad led the RJD-rule for 15 years while the JD(U)-BJP combine government is ruling at the moment for the last 15 odd years. What kind of change the people of Bihar are expecting… I believe, by and large they failed to deliver good governance,” Kishor said.

As per the plan, he wants to communicate with 17,000 – 18,000, who are socially active and intellectuals in the state as their feedback was important for him. The idea is to include them or take support of these people for the movement in the next three to four months and then he will start ‘padyatra’ in Bihar.

Reacting on Lalu Prasad, Nitish Kumar and Tejashwi Yadav’s comments, he said, “They are big leaders of the country. Hence, it is not necessary for them to take notice of a small person like me. Even those who are commenting on me after my tweet, they are wasting their own time. I am a very small person from the state,” Kishor said.

“Leaders like Lalu Prasad and Nitish Kumar emerged from the JP movement, but we have to think about whether the goal of that movement was achieved or not. In my opinion, it was not achieved, hence, we have to deeply analyse with my team for more than 1 year before deciding to go to the people of Bihar,” Kishor added.

“After that JP movement, there has been no such movement in Bihar. I am not saying that our initiative would turn out to be similar to that of the JP movement, but I must say that one movement is required here in Bihar. Who has done 3,000 km ‘padyatra’ earlier. If we want to change in Bihar, we have to change the thinking of the people at the mass level,” he said.

“In the last 10 years, I was involved in making strategies for different political parties. Now, I want to start a political journey from zero in Bihar. I will go before the people of Bihar and if results are positive then we will decide for the next move of — whether I would form a political party or not. At present, we are not going to form any political party,” he stated.

In 2020, I had difference of opinion on the issue of CAA and NRC. I objected to the policy of Nitish Kumar to vote in favour of the CAA and NRC. Still, JD(U) did that. Nitish Kumar, however, convinced me that CAA and NRC would not be implemented in Bihar but I told him that I would not stay in the party with compromising policies. Due to my objection, the party expelled me,” he said.

After eviction from the JD(U), I started the same movement in 2020 but it was stopped due to the Covid-19.

“Now, I am not saying that Covid is wiped out from the country, but the situation has improved now. Hence, I have decided to restart that initiative again from Champaran,” he said.

Patna: Prominent political strategist Prashant Kishor Thursday finally revealed his plan — a year to connect with the common people in Bihar before deciding to take any big political step. Kishor, while interacting with the mediapersons here, said that he will start ‘padyatra’ from Gandhi Ashram in West Champaran from October 2 this year and […]

Who is Faisal Bani? Everything you need to know about Kashmiri YouTuber who uploaded video of him beheading Nupur Sharma