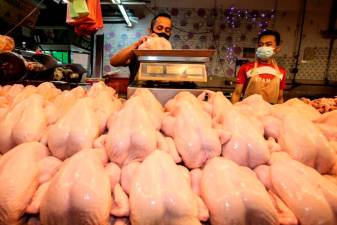 KUALA BERANG: The new maximum price for chicken, which will be announced tomorrow, takes into account the interests of consumers and traders, said Domestic Trade and Consumer Affairs Deputy Minister Datuk Rosol Wahid.

He said although there was a possibility of a slight increase in the new maximum price, it was a win-win situation between consumers and players in the livestock industry.

“The ministry, through its enforcement personnel, always conducts monitoring to ensure the supply of chicken in the market and stability of its price,” he told reporters after opening the 15th general meeting of the Hulu Terengganu branch of the Persatuan Imam Bilal Mukim here today.

Rosol said the ministry was also investigating on claims of some breeders, wholesalers and retailers who imposed additional charges, such as for catching and cutting the chicken and plastic costs on consumers.

In another development, he said the ministry was aware of the shortage of the one-kilogramme packet cooking oil in the market and that the ministry he had applied to the Ministry of Finance to increase the quota to overcome the problem.

“Currently, the government supplies 60,000 tonnes of subsidised cooking oil a month and we are asking for an additional 10,000 tonnes a month to solve the people’s problems,” he added.-Bernama

Car driven off into river in Tapah