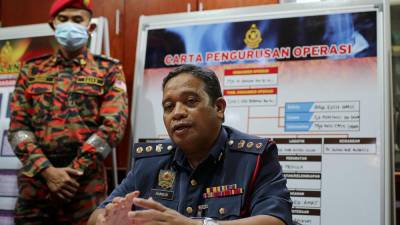 SEREMBAN: The Negeri Sembilan Fire and Rescue Department received 119 emergency calls throughout the national Operasi Selamat in conjunction with the Aidilfitri celebrations from April 28 to May 8.

“Structure fires were the highest in terms of number, with 15 cases, followed by other fires, 12 cases, open fires four cases, and vehicles, two cases. No fire-related deaths occurred in any case.

“We received 16 cases of traffic accident calls, including two fatal crashes on town/state roads in the area of Felda Palong 5, Gemas and Simpang Durian, Simpang Pertang, Jelebu,“ he said in a statement here today, adding that 29 individuals were involved in the crashes.

Hamdan said the statistics showed that the various prevention campaigns and programmes conducted by the department were effective and that Malaysians were also aware about fire and traffic related safety issues. — Bernama

Jailed Cambodian American activist is allowed to meet with lawyer

Claire and Joseph, from Taipei, on the challenges of family in Asia