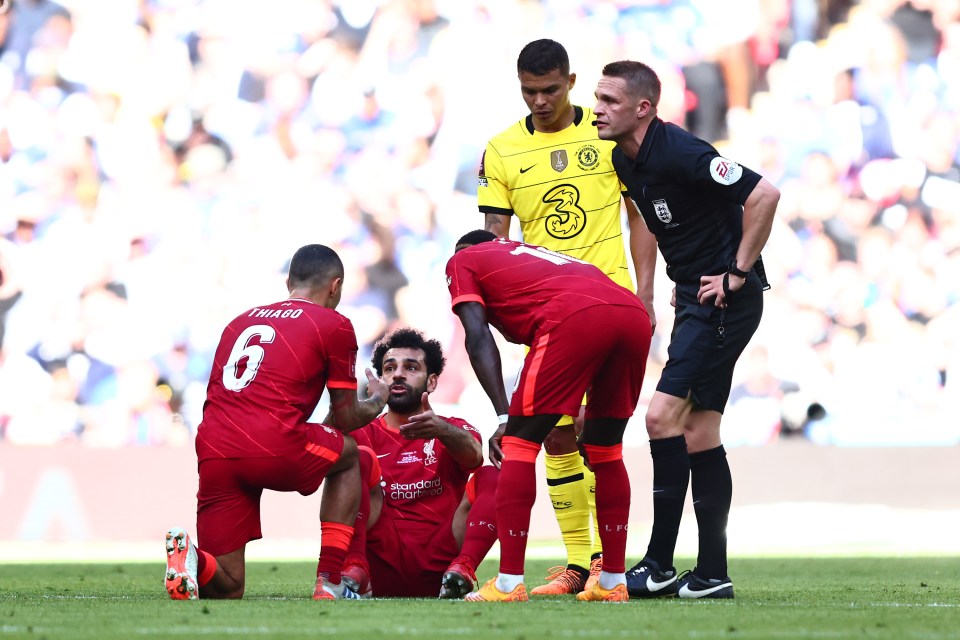 Mohamed Salah and Virgil van Dijk both revealed their injuries are not significant after trudging off during the FA Cup triumph over Chelsea.

The Premier League’s top scorer pulled up in the first-half, before hitting the deck in discomfort as Liverpool edged out Chelsea on penalties to win the FA Cup.

Salah was then removed from the fray in the 33rd minute in place of Diogo Jota, but left the Wembley turf of his own accord.

He was later joined on the bench by talismanic defender Van Dijk who was withdrawn in favour of Joel Matip ahead of extra time.

But the two star players fully expect to take part in the Champions League final against Real Madrid in two weeks’ time as Liverpool eye a historic quadruple.

Salah said: “I’m good, everything is good. I just felt a little bit my groin but it’s going to be fine.”

And Van Dijk said: “We’re going to check it out. I felt in the first half when I sprinted, I felt a twinge behind my knee, I played on. In the end, I can’t risk it for the team and I need to trust Joel. Hopefully it will be fine.”

Jurgen Klopp had already been dealt an uncomfortable blow in the Reds previous fixture with a mirror-image incident taking out key midfielder Fabinho.

Most read in FA Cup

The Brazilian similarly walked off the pitch after 30 minutes during a 2-1 Premier League win over Aston Villa, and was later confirmed to have picked up a hamstring strain.

Fabinho will now be out of action until Liverpool’s Champions League final meeting with Madrid on May 28.

Salah had previously expressed his excitement at landing Madrid in the European Cup final, the side he faced with Liverpool in 2019, but left the pitch in tears after a tangle with Sergio Ramos.

“I want to play Madrid, I have to be honest,” the forward said after reaching the final.

Mitchell, Blundell Add Most Partnership Runs For NZ During A Test Series