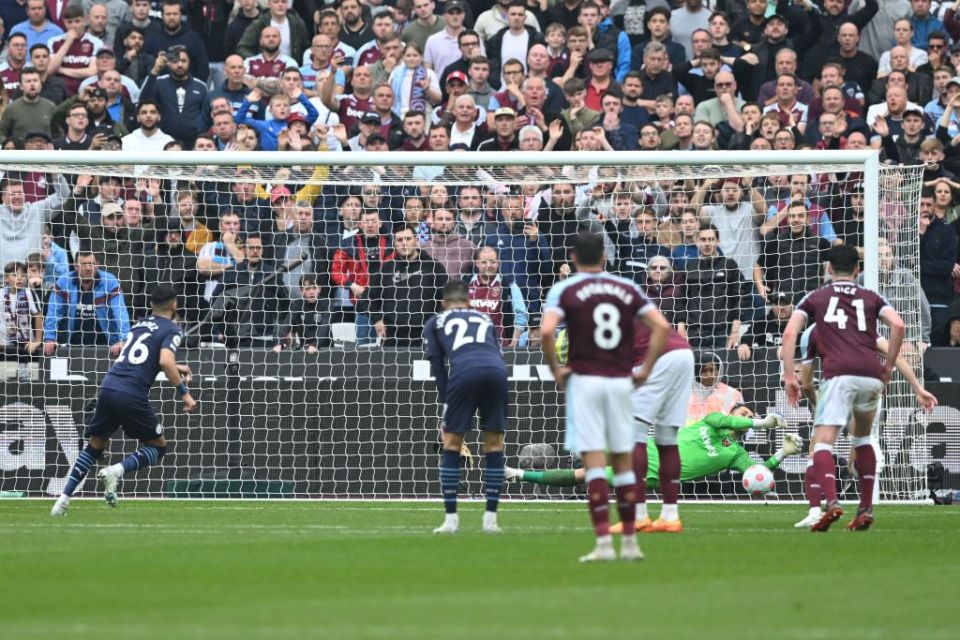 Manchester City came from 2-0 down to draw 2-2 with West Ham at the London Stadium on Sunday, retaining their advantage in the Premier League title race.

Jarrod Bowen scored a brace which saw the hosts lead comfortably at half-time, but a deflected effort from Jack Grealish and a Vladimir Coufal own-goal levelled the game.

In the 84th minute, Riyad Mahrez had the chance to win the game and all-but seal the title, only for Lukasz Fabianski to produce a dramatic penalty save.

That through ball though

BOWEN HAS BAGGED A BRACE!!!

The opening stages of the match were relatively uneventful, with a comical injury to assistant referee Gary Beswick the inadvertent highlight.

Then, in the 24th minute, the game burst into life as West Ham took a surprise lead.

Out of nothing, Pablo Fornals played an impressive ball over the top which gave Bowen the chance to run in on goal.

He rounded Ederson and fired home from an acute angle to break the deadlock.

City struggled to dig out clear-cut chances as they went in search of an equaliser.

Not long before half-time, they found themselves 2-0 down as a result.

GAME ON! Grealish has snatched one back for Man City!

This time it was Michail Antonio who played a perfect pass to set up Bowen, who bagged a brace by lashing the ball past Ederson.

City responded with a fast start to the second period, cutting the deficit in the 49th minute.

Grealish made it 2-1 with a deflected strike – his first Premier League goal since December.

From this point onwards City’s pressure increased and they went close on several occasions.

West Ham had a fleeting opportunity on the break as Antonio failed to chip Ederson, and they were punished soon afterwards.

Pep Guardiola’s side won a free kick out on the left, which Riyad Mahrez whipped into the danger zone.

In a desperate attempt to clear, Vladimir Coufal headed the ball past Lukas Fabianski and into his own net, levelling the game with 20 minutes to go.

As the match entered the final moments, Gabriel Jesus was felled in the box by Craig Dawson and a penalty was given after a VAR check.

However, Mahrez’s strike was superbly saved by Fabianski and the match ended 2-2.

The result ensured that City retained a narrow advantage in the Premier League title race, now four points clear of Liverpool having played a game more.

The Reds still have Southampton to play on Tuesday before their final-day fixture against Wolves, when City will play Aston Villa.

KKR’s playoff chances go up, an almost 90% chance of RCB finishing in top 4

Nigeria Adds Up the Costs of Missing the World Cup