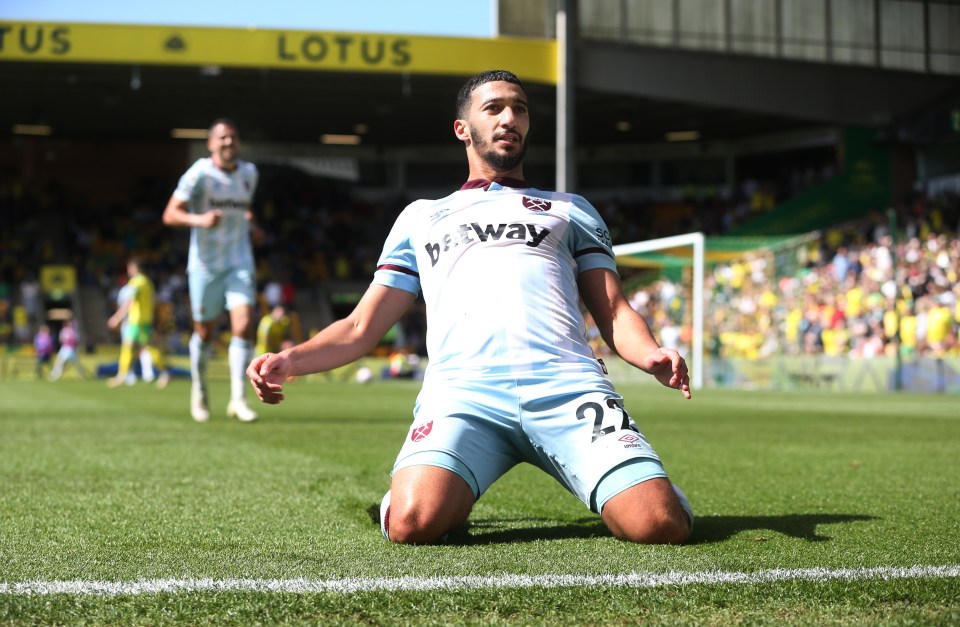 West Ham took their frustrations out on Norwich and put four past the team already heading back to the Championship next season.

Said Benrahma scored twice with Michail Antonio and Manuel Lanzini also on the scoresheet in the 4-0 victory at Carrow Road.

It follows the Europa League heartbreak David Moyes’ side suffered as they crashed out to Eintracht Frankfurt in the semi-finals on Thursday.

Benrahma was handed a rare start, replacing Tomas Soucek, and made the most of his chance.

He opened the scoring in the 12th minute at Norwich with a deflected shot that City goalkeeper Tim Krul let slip underneath him.

Michail Antonio added West Ham’s second after half an hour following another error from Krul with Bowen grabbing the assist.

It was his tenth of the season, joining Liverpool star Mohamed Salah as the only two players in the Premier League to have ten or more goals and assists.

He is only the second West Ham player to achieve this feat, after Paolo Di Canio managed it in the 1999/2000 season (16 goals and 13 assists.

Benrahma scored again to give West Ham a 3-0 half-time lead, before Norwich thought they had given themselves a semblence of hope of an unlikely comeback.

Sam Byram put the ball into the back of the net after Lukasz Fabianski let the ball slip through his hands, but a VAR intervention saw the goal chalked off for handball.

West Ham went 4-0 up from a Manuel Lanzini penalty after Jacob Sorensen handled in the area.

The Hammers moved to 55 points and are just three behind Manchester United with a game in hand.

Hardik Pandya – ‘I have started to balance things in my life’