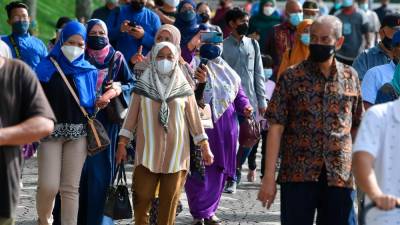 PUTRAJAYA: The huge crowd that began arriving for the Prime Minister and Ministers’ Hari Raya Aidilfitri Open House today, some as early as 7.30 am, saw the gate to the Seri Perdana Complex opened at 9.30 am, which was earlier than usual.

They were required to queue at several canopies set up in the area before being allowed to enter Laman Sari, which is the venue of the open house, the first to be hosted by Datuk Seri Ismail Sabri Yaakob and his cabinet after he was appointed as Prime Minister on Aug 20 last year.

A special lane is provided for senior citizens, people with disabilities and pregnant women.

The kampung-style open house is from 10 am to 4 pm with a huge spread of Hari Raya dishes, comprising more than 40 types of traditional dishes, served to the guests, who were greeted by the prime minister and his wife, Datin Seri Muhaini Zainal Abidin, themselves, as well as other cabinet ministers, including Senior Trade and Industry Minister Datuk Seri Mohamed Azmin Ali, Menister in the Prime Minister’s Department (Economy) Datuk Seri Mustapa Mohamed and Higher Education Minister Datuk Seri Dr Noraini Ahmad.

This is the first Aidilfitri open house hosted by the Malaysian Prime Minister and Cabinet since the COVID-19 pandemic hit the country two years ago.

The last time was in 2019, which was hosted by then Prime Minister Tun Dr Mahathir Mohamad and his cabinet.

Meanwhile, guests entering the Seri Perdana Complex are reminded by security personnel not to bring along prohibited items, such as umbrella and scissors, into the premises.

Buses are provided at three drop-points every 15 minutes to pick up guests going to the open house. They are at the Putra Mosque, Tuanku Mizan Zainal Abidin Mosque and Putrajaya Sentral.

Md Firus Khan Nizamuddin, 42, from Sungai Pinang, in Penang, was among the guests at the open house. Along with him were his wife, mother-in-law and his six children.

“This is the fourth time my family and I attend an open house at Seri Perdana. We are happy to be able to meet the prime minister and other ministers whom we also saw on television,” he said when met by Bernama.

The lorry driver said they left Penang last night and stopped at the Tapah Rest Area to get ready and arrived at Seri Perdana at about 7.30 am. They family were all dressed in blue.

R.Selvi,50, from Kepong, Kuala Lumpur, considered herself as a hardcore visitor at the Aidilfitri open house at Seri Perdana having attended the event more than 10 times.

“I have also shook hands with many leaders and am excited to see Prime Minister Ismail Sabri today,” said the woman, clad in the traditional Punjabi suit. — Bernama

Kudat the ‘Bali of Borneo’ has great potential for rural tourism