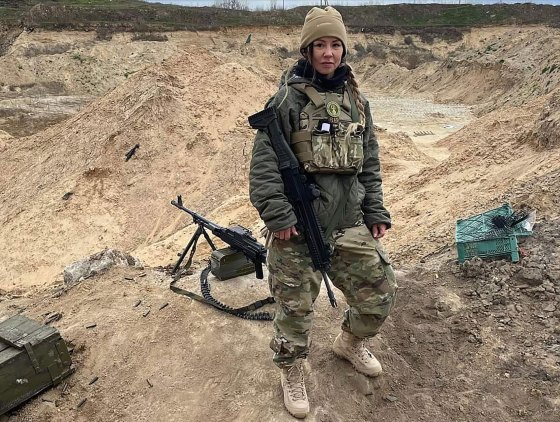 ‘I Can’t Say No to Mothers in Need.’ The Foreign Women Joining Ukraine’s Fight Against Russia

Sandra Anderson Eira doesn’t go short of appreciation. Fighting on the front line in Ukraine, the 35-year-old says locals have given her chocolate, roses, and even pairs of socks.

“There have also been gifts of hugs and tears, happy tears,” she says. Formerly a member of the Sami Parliament in her native Norway, with a 10-year career at the helm of a commercial fishing ship, she has been battling Russian troops since early March.

She arrived about a week after President Vladimir Putin launched the full-scale invasion. She’d never previously visited Ukraine, and made her way to Kyiv, signing up as a combat medic to the International Legion, established by President Volodymyr Zelensky in a bid to garner foreign support on the ground. She joined an almost entirely male unit, made up of predominantly American and British fighters who call themselves the “dirty dozen.” They were deployed to the southern front, and are now on the move again, heading to a location Anderson Eira cannot disclose for security reasons.
[time-brightcove not-tgx=”true”]

She is one of scores of foreign women who have come to Ukraine to join the war effort, whether in combat or delivering vital aid. The government has declined to confirm the number of foreigners serving in Ukraine, but there are believed to be several thousand, spread across the International Legion and other units.

The conflict, now in its third month, is both challenging and reinforcing traditional gender stereotypes. Ukrainian martial law forbids men of fighting age from leaving the country and women are widely expected to look after children and the elderly. But as female lawmakers in Kyiv grapple with the mass rape of their people and Ukrainian women mobilize en masse in the war effort, those perceptions are also changing.

Around 15% of the regular Ukrainian army is female—about 30,000 personnel. Foreign women are far rarer. A spokesman for the legion says “a couple dozen” of its members are women, from the U.S., U.K., Australia, the Netherlands, Portugal, Hungary, Israel, Georgia and elsewhere.

“The last time there was a big war on this continent, it was my country in need of aid,” Anderson Eira says, referring to Norway’s occupation under Nazi Germany, “so I see this as a moral obligation.”

The war in Ukraine, now in its third month, is often painted as a battle between darkness and light, and the foreign women described how their missions extend beyond Ukraine, to protect the survival of freedom-loving countries everywhere.

“Putin is insane and unstable,” says Hannah Jarvis, a 39-year-old British army veteran who will soon depart for Ukraine in a donated four-wheel drive with medical aid. “He’s got his hand on the nuclear button and we’re allowing him to act with impunity. We have got to stand up to bullies,” she says from Abergavenny in Wales, where she is a local councilor and office manager for the Welsh parliament.

Read More: Ukrainian Women Are Mobilizing Beyond the Battlefield to Defend Their Country

Jarvis was last in a war zone 15 years ago, serving in Iraq. Since the start of the present war, she has been ferrying medical kits to Poland with the Bridge to Unity charity. Her trip in mid-May will be the first time she crosses the border into Ukraine. She will fill her vehicle with supplies—syringe drivers, monitors, tourniquets, defibrillators and trauma kits—for the bombed Zhytomyr maternity hospital in the western part of the country. Then she hopes to return to the U.K. with a Ukrainian mother and child who have applied for British visas.

Jarvis is a single mother to a girl, 8, and a boy, 6, and has told her kids that she is only going as far as Poland. “I get criticized by people online who say I’m not looking after my family,” she says, with frustration. “But this is precisely why I am going. I can’t say no to other mothers in need. I can be a good role model.”

Many foreign women are in Ukraine because they do not believe only men should fight. When war first broke out in late February, 31-year-old Georgian Nana Tomaradze was at home in Tbilisi, with her 8-year-old son. Her Ukrainian husband was in his homeland, working with the country’s security services.

“I thought, what kind of wife am I to be sitting here? He could die there. Am I to just watch this all from afar?” Tomaradze dropped her son off at his grandfather’s and jumped in a bus “full of upset Georgians” bound for Ukraine. They arrived five days later.

“There were former soldiers, bartenders, painters, and some poets. We know what it feels like to be at war with Russia,” she says from Kyiv, referring to Moscow’s 2008 invasion of Georgia and continued occupation of some of its territories.

Once in Ukraine, Tomaradze joined the International Legion, where she received a crash course in how to handle a gun. Two months later, she met up with her husband and began working with him and a friend, clearing Russian landmines from the outskirts of the Ukrainian capital. “The fight against Russia involves everyone,” says Tomaradze. “We should at least use our energy for something good in the world, to make it a better place.”

Georgia, with a population of nearly 4 million, “understands Ukrainians more than anyone else in the world,” says Mariam Geguchadze, founder of the Shame Movement—a pro-European protest group in Tbilisi. Geguchadze says she knows of at least 10 Georgian women fighting in Ukraine.

One of them is 63-year-old Darejan Maisuradze, who moved to Ukraine from Georgia in 2008 and set up a massage salon in Chernivtsi, a city of around 250,000 in the southwestern part of the country.

Maisuradze served in the military during her youth in the former Soviet Union, training as a sniper. She says she decided to take up arms again, some decades later, when she saw children who had been evacuated from Bucha—the site of some of the war’s worst atrocities. “Their eyes looked like they were made of glass,” she says. “Putin ruined their childhoods, so I must now fight.”

Read More: You Never Stop Being a Child of War

As part of the territorial defense forces, she now guards Chernivtsi’s checkpoints. “Russia is the empire of evil,” she says, late one night in her apartment, over the din of her pet cockatoos. “And evil must be eliminated.”

And on the front lines, traditional gender divisions have become meaningless. “You live on top of each other, you breathe down each other’s necks,” says Anderson Eira, describing how she shares “hopes and dreams and also bathroom breaks” with her fellow male legionnaires, in conditions that are reminiscent of her time at sea, where women make up only 1% of Norway’s fishing crews. But Anderson Eira acknowledges that would change in a heartbeat if she were captured by the Russians and became a prisoner of war. “There will be sexual violence,” she says, describing how she has seen firsthand how Russian soldiers have raped Ukrainian women and targeted town squares and evacuation buses of civilians. “It’s also a big motivation that keeps me going.”

And many of the women feel they have an even greater contribution to make. “There should be more of us,” says Maisuradze, wryly. “We’re better shooters, more precise. Men even envy us.”

The United Kingdom has the highest inflation in the G7

Which Tom Cruise film has made the most at the ticket booth?

Airman suspected of insider attack on U.S. base in Syria that injured 4 Americans