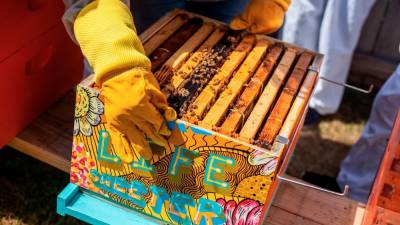 Eidrish Mohd Khalid was pronounced dead at the Sultanah Nur Zahirah Hospital (HSNZ) at 11.20 pm yesterday after he was stung about 60 times.

The victim’s father, Mohd Khalid Omar, 40, said the incident happened at about 5.40 pm when his youngest child was playing in the nearby playground with his sisters, Nur Adelya Qaisara, 10, and Nur Aiyris Dania, seven.

“As soon as I heard Adelya’s screaming, I immediately ran outside and saw Eidrish lying on the ground with wasps covering his body.

“When I carried him into the house, he (Eidrish) was still alive, but very weak. He was not screaming or crying,“ he said when met at his family’s home in Kampung Tok Jembal today.

Mohd Khalid said he and his two children were also stung.

“Adelya, who was stung twice, is still being treated at the HSNZ Intensive Care Unit (ICU) while Aiyris received outpatient treatment.

“I was supposed to be warded after being stung 20 times, but I had to go home to arrange for Eidrish’s funeral at about 10 am today,“ he said. — Bernama

Vietnamese Facebook activist’s family speak out about his ‘secret trial’

Card Sako: Christian pain caused by the Islamic State in the Nineveh Plain is still raw

Shah Alam man charged for kidnapping his ex and her son