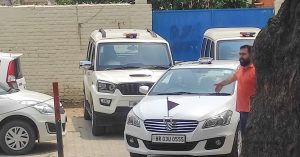 New Delhi: The Delhi Police registered Friday a case of kidnapping after BJP leader Tajinder Bagga was arrested by Punjab Police personnel, officials said. They claimed that the Punjab cops did not inform the local police before arresting Tajinder Bagga from his residence in Delhi’s Janakpuri locality.  Bagga is also national secretary of the Bharatiya Janta Yuva Morcha (BJYM). He was held in connection with a case registered against him in Mohali last month, Punjab Police said.

Earlier in the day, Bagga’s father – Pritpal Singh Bagga (64) – had complained that some people came to his house in the morning. They took away his son, a senior police officer said. He added that the case has been registered at Janakpuri police station.

The case was registered under sections 452 (house trespass after preparation for hurt, assault or wrong­ful restraint), 392 (robbery), 342 (wrongful confinement), 365 (kidnapping), 295 (injuring or defiling place of worship with intent to insult the religion of any class) and 34 (common intension) has been registered, the FIR stated.

Delhi Police has not shared any official details regarding the matter. In the FIR, Pritpal said, “I was present at my home along with my son on Friday. Around 8.30 am, someone knocked the door repeatedly. When I opened, some persons entered my home and manhandled me. Some of them had weapons.”

Pritpal added: “They started asking me where is Tajinder Singh Bagga? When I asked them what they wanted from Tajinder, they slapped me. Later, my son came there and they started beating him. When I tried to intervene, they pushed me. When I took out my phone to make their video, they beat me up and snatched the mobile. Later, they forcefully took away my son who was not allowed to wear a turban and was dragged out of the house.”

Pritpal was accompanied by Delhi BJP president Adesh Gupta when he went to file the FIR.

However, the Punjab Police team was stopped in Kurukshetra’s Pipli, with a Haryana police official saying they had received information that Bagga was ‘forcibly’ picked up from his residence.

A team of Delhi Police personnel, including senior officials, went to Kurukshetra, took Bagga’s custody and left for the national capital, a Kurukshetra police official said.

Pipli Sadar police station SHO Malkiat Singh said, “The Delhi Police took him (Tajinder Bagga) with them in view of an FIR registered in Delhi about his kidnapping.”

Last month, the Punjab Police booked Bagga on the charges of making provocative statements, promoting enmity and criminal intimidation. The case was registered on a complaint of AAP leader Sunny Ahluwalia, a resident of Mohali.

The FIR registered April 1 referred to Bagga’s remarks March 30, when he was part of a BJP youth wing protest outside the resident of Delhi Chief Minister Arvind Kejriwal.

New Delhi: The Delhi Police registered Friday a case of kidnapping after BJP leader Tajinder Bagga was arrested by Punjab Police personnel, officials said. They claimed that the Punjab cops did not inform the local police before arresting Tajinder Bagga from his residence in Delhi’s Janakpuri locality.  Bagga is also national secretary of the Bharatiya […]