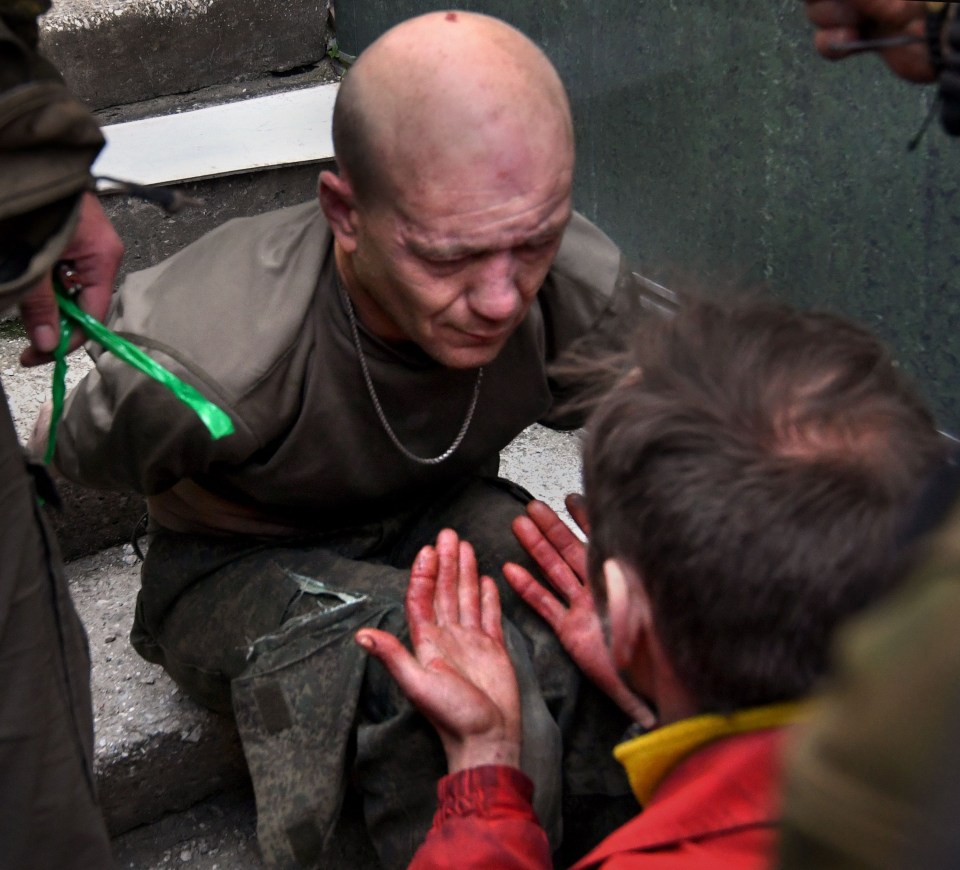 THIS is the harrowing moment an utterly broken dad shows the blood of his slaughtered son to one of Putin’s evil butchers.

Vitalii Seleveni thrust his bloodstained hands in the face of a captured Russian soldier to show him all that is left of 15-year-old Dennis who was killed by a Russian shell in Kharkiv, Ukraine.

The selfless lad was only helping his parents evacuate terrified animals at the Feldman Ecopark zoo when a Russian shell snuffed out his short life.

Young Dennis was also left with a gaping injury in his thigh which spilled blood over his clothes before being rushed to hospital.

But his shrapnel ridden body was motionless 30-minutes after arriving for urgent care – his mum Svetlana collapsed in grief.

The lad’s blood was still stained on dad Vitalii’s hands the moment he learned he would never see his cherished son ever again.

As Vitalli staggered outside the medical centre after hearing every parents worst nightmare – he came face-to-face with a Russian soldier who had been captured during the attack.

“This is what you are doing to our families“, he reportedly said as he thrust his blood drenched hands in the face of the blindfolded butcher.

The solider – who had his blindfold ripped off so he could see the evil he had committed – could be seen crumpling his face at the sight.


Fireball erupts at Russian plant in ‘sabotage over Ukraine invasion’

Distraught zoo staff screamed at the Russian soldier in grief after hearing that Dennis had died.

The strike also seriously injured two other team members from the zoo on Thursday.

The Feldman Ecopark paid tribute to Dennis, describing as a “hero” who will “always remain in our hearts”.

Efforts to move the animals to safety have been going on for weeks after a relentless shelling campaign from Russia which has now killed six employees..

The Russian strikes have killed around 100 animals including white tigers and jaguars and have obliterated a number of enclosures, according to Ukrinform.

Oleksandr Feldman, the zoo owner and a local MP, said two Russian soldiers were also brought to the hospital in Kharkiv with the wounded volunteers and said it was not clear how they got into the park.

Earlier in the war, three employees of the Ecopark died during shelling after they came to feed the animals.

And on April 19, the bodies of two Ukrainian zoo workers who were allegedly shot dead by Russian soldiers were found on the park’s premises.

Since then it was claimed the zoo had no choice but to put put down the largest animals – including bears and lions.

There were more than 6,000 animals at the attraction but Feldman later lamented “there is no more Ecopark”.

The zoo is not the only victim of Putin’s evil army.

Heart-breaking photos from the Yasnogorodka Ostrich Farm and Family Ecopark, in a village on the outskirts of Kyiv, showed animals that had starved to death since the invasion.

Heartless Russian soldiers had even used the animals as target practice, it was alleged.

Lockdowns in Shanghai and other cities pose growing threat to economy

US: Transgender medication law in Alabama blocked by judge