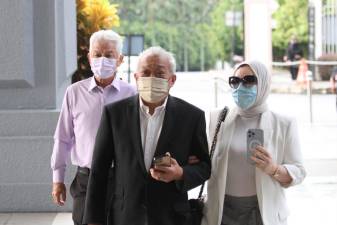 Law argued that the testimony by prosecution witnesses showed that Bung Moktar obtained a bribe amounting to RM2.8 million to ensure Felcra Berhad invested RM150 million in Public Mutual Berhad unit trusts while Zizie Izette abetted her husband in obtaining the bribe or deliberately helped or conspired with her husband to commit the crime. .

“SP25 had expressed her intention to Zizie Izette that she would like to get acquainted with Bung Moktar so that she could market unit trust products to Felcra Berhad,“ he said when closing the prosecution case.

Law said the evidence that money amounting to RM2.8 million was received by Zizie Izette was also not refuted by the defence.

He said the woman had no involvement whatsoever in Felcra Berhad, especially with regard to the investment by Felcra Berhad in Public Mutual, because it was official business.

“In this case, Zizie Izette’s role was only to introduce Bung Moktar to SP24 and SP25. Therefore, there is no other reason for Zizie Izette to receive the money except for one purpose, which is to pass it on to her husband,“ said Law.

According to Law, Bung Moktar should have reported to the board members of SP24 and SP25;s intentions of giving cash incentives with regard to Felcra Berhad’s investment instead of keeping quiet, and the couple’s actions showed there was ‘conduct’ to commit a crime.

He said there was no evidence to show that the couple made any declaration to Felcra Berhad that they, or one of them received any form of commission or fee from Felcra Berhad’s investment in the unit trusts, whereas, in the evidence of SP25, it was clear that SP25 had told Zizie Izette about the ‘introduction fee’ she intended to give the latter.

“On record, there is no testimony from SP24 and SP25 stating that they gave the gratification to Bung Moktar and had been received by him. In fact, both the key witnesses, did not support the prosecution case at all. In fact, the evidence on record, clearly shows that Bung Moktar did not receive the gratification at all,“ he said adding that the testimony of SP24 and SP25 had destroyed the prosecution case.

He said both witnesses were regarded by the prosecution as hostile witnesses as their evidence in court and statements to the Malaysian Anti-Corruption Commission were inconsistent, not credible and therefore, their evidence should be rejected even though their testimonies were corroborated or otherwise.

On May 3, 2019, Bung Moktar, 64, pleaded not guilty to two charges of accepting bribes amounting to RM2.2 million and RM262,500 as an inducement to obtain Felcra’s approval to invest RM150 million in Public Mutual unit trusts.

Bung Moktar, who was the non-executive chairman of Felcra at the time, was accused of accepting bribes from an investment agent, Madhi Abdul Hamid, through Zizie Izette at Public Bank’s Taman Melawati branch here between 12.30pm and 5pm on June 12, 2015.

Fears grow for Guo Feixiong, on hunger strike in a Guangzhou detention center

Calls amplify for ASEAN to punish Myanmar for dissidents’ executions