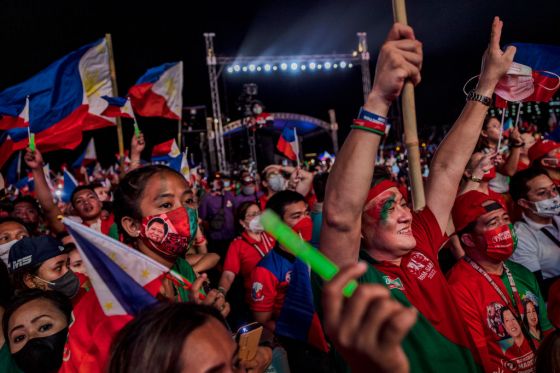 Ferdinand “Bongbong” Marcos Jr., the 64-year-old son of a kleptocratic dictator, has a huge lead in race to become the next president of the Philippines’ following the election Monday.

With more than 80% of the votes counted, Marcos had received 25 million votes, more than double the number of his closest rival, Vice President Leni Robredo, in the multi-person race. Votes were still being counted early Tuesday local time.

Marcos Jr.’s father, Ferdinand Marcos Sr., ruled the Southeast Asian nation of 110 million for 21 years before being ousted in 1986. The elder Marcos tore up presidential term limits, imposed nine years of nationwide martial law and brutally quashed political dissent. During his rule, tens of thousands were arrested and thousands of his critics and opponents killed, while political allies benefited from rampant cronyism. He and his wife, 89-year-old Imelda, were also estimated to have embezzled up to $10 billion from state coffers until a popular uprising drove the family into exile in Hawaii, where the elder Marcos died in 1989.
[time-brightcove not-tgx=”true”]

Marcos Jr. was a local government official during his father’s regime. Experts tell TIME that his political rehabilitation is a reflection of the electorate’s frustration at the failure of successive regimes to alleviate long standing problems like poverty. Blatant misinformation, pumped out by supporters on social networks, helped to whitewash the Marcos family’s bloody legacy.

His canny choice of running mate also united the Marcos political machinery with that of the country’s other leading dynasty. Sara Duterte-Carpio, who is running for vice president, also had a commanding lead in early vote counts. Her father, outgoing President Rodrigo Duterte, retains significant popularity despite his autocratic rule and a brutal war on drugs that left at least 5,000 dead. Rodrigo Duterte is prohibited from running again by term limits.

Marcos Jr. voted in his hometown of Batac, Ilocos Norte—the bailiwick of his late father. He voted alongside his mother Imelda, and his sister Irene Marcos-Araneta.

In a statement, Marcos thanked his supporters, some of whom gathered to rejoice outside his party’s national headquarters in Metro Manila. “Many are saying that this fight is over but it’s not yet over,” Marcos Jr. said. “So let’s wait until it’s really very clear and 100% of the votes are counted.”

Read More: Philippine Presidential Elections Are All About Celebrity Power

While many fear that a Marcos Jr. win would mean a return to the oppression of his father’s day, experts say that it could signal a new era of dynastic politics, instead of brutal dictatorship. Antonio La Viña, former dean of the Ateneo School of Government in Manila, tells TIME that a Marcos Jr. victory is akin to “cementing the ruling class.”

What to expect under a Marcos presidency

Marcos Jr. made platitudes about “unity” the heart of his campaign, but was short on specifics—save for a promise to boost the COVID-ravaged economy.

Critics fear that a Marcos win could continue the Marcos family’s historical revisionism that was highlighted the presidential campaign. Presidential authority extends to institutions investigated his family’s regime, including the Presidential Commission on Good Government, created by Marcos Sr.’s successor in 1986 to go after the family’s ill-gotten wealth. It has retrieved $5 billion so far and is in the process of securing another $2.4 billion, chairperson John Agbayani told Reuters.

In April, Marcos Jr. suggested to CNN Philippines that his family was not corrupt, but even if it was, the commission’s focus should be broadened. “I mean, if I really have a corrupt relative, his name must also surface. But it shouldn’t only be us. It should be all.”

Read More: How the Son of a Dictator Became So Popular in the Philippines

As Philippine president, Marcos Jr. would also have the power to appoint the head of the country’s human rights commission. He has previously raised doubts about rights violations under his father’s rule, even though the courts have awarded some $200 million in compensation to over 11,000 victims of such violations between 1972 and 1986.

A Marcos presidency is also expected to adopt a friendly stance toward China, continuing the stance of Duterte until recently, who awkwardly declared “I’m Chinese” during a 2016 visit to Beijing that he hailed as “the defining moment of my presidency.”

In a January interview with a popular Philippine TV host, Marcos Jr. suggested he would set aside a 2016 U.N.-backed ruling against China’s claims in the widely contested South China sea and instead come to a bilateral agreement with Beijing. Such a move would likely inflame tensions with Washington, which has been anxious to deny China control of the strategically important waterway.

Our readers sent updates on stories that have resonated with many of you.