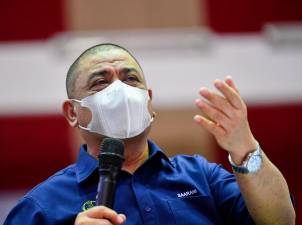 IPOH: The Perak government has raised the issue of road conditions on the Jalan Gerik-Jeli to the federal government following frequent complaints from motorists pertaining to its bad and unsafe conditions as well as frequent road accidents.

Menteri Besar Datuk Seri Saarani Mohamad(pix) said he already highlighted the problem in a meeting between Menteri Besar, Chief Ministers and the Prime Minister in February.

He said the state government was aware of the Jalan Gerik-Jeli’s conditions but any road improvement or maintenance work was under the jurisdiction of the Ministry of Works as the road was a federal road.

“Based on the meeting, it has been taken into account. There will be provisions to repair and maintain the road from Gerik to Jeli,” he said when met by reporters after officiating the Ipoh Heritage Tourism Project Padang Ipoh here last night.

In the meantime, Saarani also explained the status of the road which was previously often mistaken by road users as a state road.

“We have two types of roads, namely federal road and state road. It involves the Constitution, the money allocated for the state will be used for state roads.

“There is the allocation for federal roads. We can’t interfere like that, just as federal money can’t be used for the state roads.

“As for the issues pertaining to Jalan Gerik-Jeli, many are unsure whether it is a state or federal road. We are the only ones who know,” he said.

Previously, there were motorists who made complaints on social media regarding the Jalan Gerik-Jeli and described it as bad and risky to their safety.-Bernama

Fr Mim, new priest for Laos from a hospital bed

Refugees displaced by conflict in Myanmar now more than 1 million