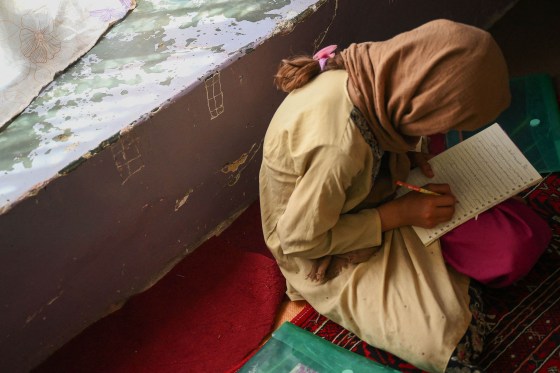 Angelina Jolie: The World Must Not Look Away From Afghanistan’s Women

I recently met a young Afghan refugee in Rome who had been months from qualifying as a doctor when the Taliban overthrew the Afghan government in August 2021. Her older sister was studying dentistry at university. Her two younger sisters were doing brilliantly in school. Overnight, they and 14 million other Afghan women and girls lost their right to go to high school or university, their right to work, and their freedom of movement. As we spoke, she hugged her father, who’d worked for decades as an expert in rural development in Afghanistan. He left everything behind when he fled with his family. With tears streaming down her face, she told me that she wasn’t sad for herself, but for all the women of her country.
[time-brightcove not-tgx=”true”]

Long before 9/11, the stoning and whipping of Afghan women and their exclusion from education was a cause of outrage globally. American and other western leaders spoke of restoring basic rights for Afghan women in the same breath as removing the Taliban as justification for NATO’s invasion of Afghanistan. The sight of Afghan women raising themselves up through their own efforts over the last twenty years—with the support of many Afghan men—was a bright light during years of continuing violence and suffering for the people of Afghanistan. One year ago, Afghan women worked as doctors, teachers, artists, police officers, journalists, judges, lawyers, and elected politicians. Afghan children braved repeated suicide attacks on their schools. The picture for rural women was very different, particularly in areas still controlled by the Taliban, but the overall sense of progress was unmistakable. All of this has been overturned with unimaginable speed.

The daughters of Afghanistan are extraordinary for their strength, resilience, and resourcefulness. I’ve met Afghan women who, as young children during the previous Taliban era, had to dress as boys in order to be able to secretly go to school. They then became journalists and lawyers and contributed to building a better future for their country, believing the promises made by their leaders and the international community that they would be guaranteed a voice in Afghan society.

Those promises were broken, and it is hard to think of a greater betrayal. Women are again being beaten in the streets or taken from their homes at night and tortured, and the country’s jails are filling up with female political prisoners. There are reports of girls being kidnapped into forced marriage with Taliban leaders. As a woman and mother, it torments me to even imagine what it must be like for Afghan families—especially those who lived through the Taliban era of the 1990s—to feel so powerless. Yet despite the dangers, the greatest resistance to the reversal of women’s rights in Afghanistan has not come from foreign powers, but from Afghan women themselves, who have taken the streets.

It’s impossible not to think that attempts to force Afghan women back into the home will fail in the long term. It’s so obvious that Afghan women are an incredible resource for the country and its place in the world, and that the economy—and society as a whole—will not function without their full participation. Peace built on the oppression of women is no peace at all, but a society constantly at war with itself. It is the height of futility—if not cowardice—for authorities in any country to incarcerate and torture women whose only crime is to have contributed to the success and health and stability and education of their own people. And it’s absurd, in the 21st century, for there to be any debate about how much education it is ‘appropriate’ for a woman to have, or for that to reveal anything other than fear of the power of a free-thinking, independent woman. I hope Taliban leaders can understand what is lost by denying Afghan women the space to to exist freely while reaching their potential. But I’m filled with dread at the reality of what Afghan women are likely to endure, and how long these repressive systems might hold onto power.

For America and other countries we allied with, the worst possible step would be to back away from Afghanistan because we are exhausted by the last two decades and ashamed of our failure. But we should remember why we were involved in Afghanistan in the first place: None of those factors have gone away.

We were right to be outraged by the mistreatment of women in Afghanistan in the 1990s, and we should still be outraged today. In the last few years America walked steadily back from its promises to Afghan women, including the decision to negotiate with the Taliban without any preconditions on women’s rights or the participation of Afghan women and civil society. We should make no further diplomatic concessions at the expense of women and instead should be looking for ways to support them. There are girls locked out of school who are hungry to learn and who need support to continue their education, online or in underground schools. There are human rights defenders in hiding who need to know that they are not forgotten and that the authorities will be held accountable for how they are treated. There are women in prison who should be released. There are Afghans in the country and in exile who need assistance to continue to keep the idea of women’s rights alive in the country, such as organizations like Rukhshana Media, which continues to report on the fate of women in Afghanistan.

And there are over six million Afghan refugees and internally displaced people struggling to survive whose situation is worsening as a result of the war in Ukraine and shortages of international aid who must not be forgotten. This is a matter of self-interest as much as principle. If proof were ever needed that there is a direct link between systems that oppress women and threats to international security, it’s that Al Qaeda leaders once again feel free to return to Afghanistan.

And to my Afghan friends, I have faith in you and your resilience and your strength. I dream of visiting with my daughters, making friends, traveling around your beautiful country, and seeing you free to determine your own future. There have been different chapters in Afghanistan’s history and many dark moments. This is undoubtedly one of them. But I’m sure that this isn’t the final chapter. The dream of a pluralistic, open Afghanistan built on the equal efforts and free voices of all its people may seem to be—and be in reality—a distant hope. But I know it’s possible. This does not end here.

These are the 10 wealthiest cities in the world — and five are in the U.S.

Nurse ‘trapped’ in job sues over contract that punishes quitters

China’s Record Drought Adds to Its Economic and Climate Woes